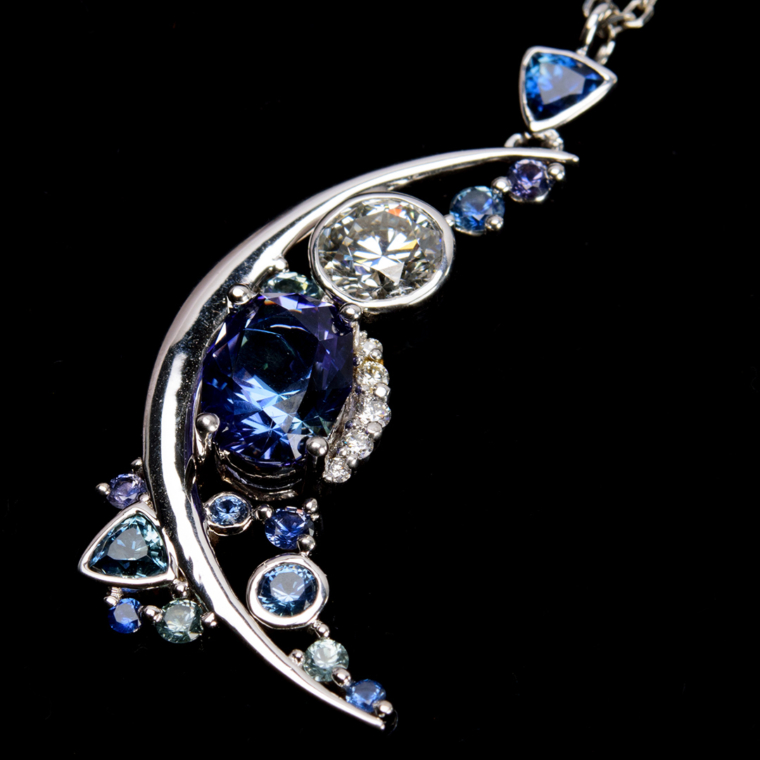 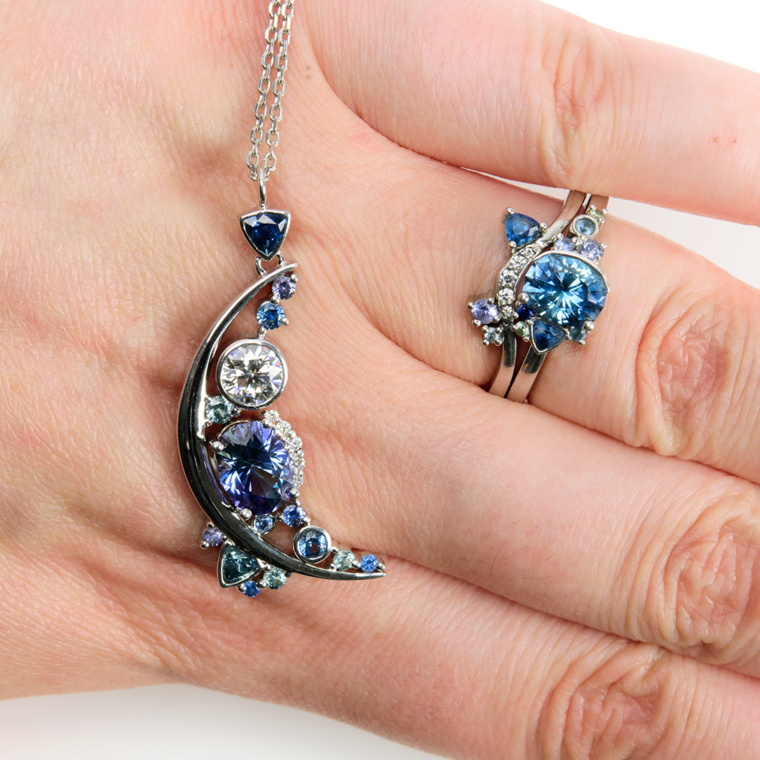 December birthstones include tanzanite, turquoise, and zircon — very much a blue-dominated gem selection! Tanzanite is an interesting gem as it noted for its deep, saturated blue to violet hues, which can come naturally or from heating a gem, and unheated tanzanite stones can run murky green-brown to warmer purple.

Mellan was a December baby (born on Christmas Eve, actually), and after he passed, I decided to incorporate his birthstone–tanzanite–into a pendant necklace I was already leaning towards making (using my previous engagement ring diamond). I wanted to have a crescent moon with a mix of sapphires offset and subtly connected to give the illusion of stars in the sky.

The featured image is of the finished piece, and the tanzanite stone is the largest, more oval-shaped gem that flashes blue-violet, which is illuminated by a band of diamonds (to represent Mellan now up in the stars). The other colored gemstones are all various shades of sapphire, which complement my updated wedding ring set (done in sapphire, which is my birthstone, and one of the first gifts hubby, then-boyfriend, gave me was a sapphire bracelet).

Both pieces were designed in collaboration with Lauryn Volovar at Earth’s Treasury, and both were excellent experiences (in case there’s confusion, this is not sponsored and both pieces of jewelry were paid for by me). I know when I last mentioned the pendant, a few readers asked for more information on it, so… here you go 🙂

Each look idea is centered around a “quad” of four shades with the expectation that one might bring in the appropriate brow bone or additional transitional shade based on skin tone. Consider these ideas a jumping off point with four “core” colors that can inspire your next look. For reference, based on how I usually apply makeup, I would consider applying the shades in this order: inner lid, middle of lid, outer lid/crease, and crease/above crease or lid.

Polestar offers an early, camouflaged glimpse at its electric SUV

We use cookies on our website to give you the most relevant experience by remembering your preferences and repeat visits. By clicking “Accept All”, you consent to the use of ALL the cookies. However, you may visit "Cookie Settings" to provide a controlled consent.
Cookie SettingsAccept All
Manage consent

This website uses cookies to improve your experience while you navigate through the website. Out of these, the cookies that are categorized as necessary are stored on your browser as they are essential for the working of basic functionalities of the website. We also use third-party cookies that help us analyze and understand how you use this website. These cookies will be stored in your browser only with your consent. You also have the option to opt-out of these cookies. But opting out of some of these cookies may affect your browsing experience.
Necessary Always Enabled
Necessary cookies are absolutely essential for the website to function properly. These cookies ensure basic functionalities and security features of the website, anonymously.
Functional
Functional cookies help to perform certain functionalities like sharing the content of the website on social media platforms, collect feedbacks, and other third-party features.
Performance
Performance cookies are used to understand and analyze the key performance indexes of the website which helps in delivering a better user experience for the visitors.
Analytics
Analytical cookies are used to understand how visitors interact with the website. These cookies help provide information on metrics the number of visitors, bounce rate, traffic source, etc.
Advertisement
Advertisement cookies are used to provide visitors with relevant ads and marketing campaigns. These cookies track visitors across websites and collect information to provide customized ads.
Others
Other uncategorized cookies are those that are being analyzed and have not been classified into a category as yet.
SAVE & ACCEPT